The Story of Guinness

The story of Guinness begins over 250 years ago in the year of 1759. At the time, an Irish brewer by the name of Arthur Guinness, who had recently come into some money, signed a 9,000-year lease on a brewery at St. James Gate, Dublin. The rent for this unused brewery was 45 euros a year, or 55 American dollars a year for those of use unfamiliar with euro conversions (like me). Now, I know what you’re thinking – a 9,000 year lease? How is that even a thing? Well luckily, Guinness explains on their website that the original brewery that was leased for 9,000 years was a 4 acre site. Today, the acreage has grown to over 50. The company bought the rights to the land outright many years ago which means that the 9,000 year lease is no longer valid.

Now that the lease mystery is solved, back to the story. Ten years after the brewery was leased, in 1769, the first export shipment of Guinness stout left on its way to England – it was a mere six and a half barrels. Arthur Guinness fathered 21 children in his life, although only 10 lived to adulthood. He sadly died in 1803 at the age of 78 and it was at this time that his son, Arthur Guinness II (points for name creativity), took over the company. Arthur Guinness II shared a love of the company with his father and was passionate about growing it. Under Guinness II, about 20 years after he took over, Guinness became known worldwide. In fact, by 1833, Guinness was the largest brewery in Ireland.

In the 1850s, Arthur Guinness II passed away, and his third son Sir Benjamin Lee Guinness succeeded him. He was apparently a man of many talents – he was also the mayor of Dublin in 1851. It wasn’t long after Sir Benjamin Lee Guinness took over the company that the trademark Guinness label was created and introduced, the year was 1862. Six years later, Edward Cecil took over after his father’s death. Cecil was both a businessman and an influential philanthropist, and under his leadership Guinness doubled in size. By 1886, Guinness became the first major brewery to be recognized as a public company on the London Stock Exchange. At that time it was the largest brewery in the world, boasting an annual production of 1.2 million barrels. In 1929, the first ever advertisement for Guinness was published in the British national press. By this year, Guinness was selling about 2 million pints per day, a large number considering the United States was in the throes of Prohibition. 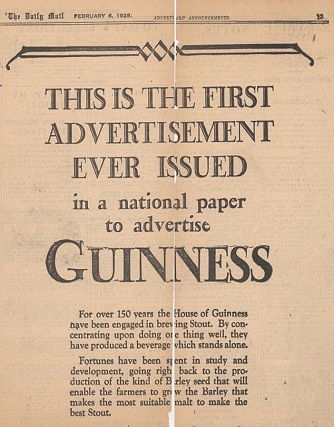 Through the years, the Guinness Brewery stayed at its home base of Dublin, Ireland. It wasn’t until 1936 that the first brewery outside of Dublin was built – it was built at Park Royal, London. By 1950, five million pints of Guinness were being sold per day and five years later, the first ever Guinness Book of Records was published (it is now called Guinness World Records). Four years later, Guinness first introduced Guinness Draught, a stout that is well-known worldwide and wildly popular today. It was in 1988 that Guinness lovers could kiss draft beers goodbye because the first canned draught was launched! Then, eleven years later, the Guinness Draught in bottle form launched (which is great news considering everyone knows beer tastes better out of a bottle).

The original Guinness Storehouse in Dublin opened to the public in 2000. Since its opening it has been one of the most popular tourist attractions in Ireland. According to Guinness, when you drink a Guinness today, you are essentially drinking the same beer that Arthur created and drank back in the 1700s (yeah, let that one sink in for a minute). As of 2008, 10 million glasses of Guinness a day are enjoyed in over 150 countries.

Today, the Guinness family no longer owns or runs the company, but they remain a shareholder (perhaps they ran out of sons). The legacy and traditions of Arthur Guinness remain present in the company, married with modern technologies to account for the massive growth the company has seen over the past 250 years. And yes, in case you’re wondering, all of the Guinness in the United States does come from Dublin. So beer drinkers rejoice – you’re drinking some authentic beer that’s been basically the same for roughly the past 300 years. Yum. And Guinness, props to you – “started from the bottom now we’re here.”

I know, I know, now you’re thirsty for a beer and some bar talk. Satisfy your cravings and go check out Taverncast: Happy Hour in Your Head!