25 Titanic Facts That No One Knew 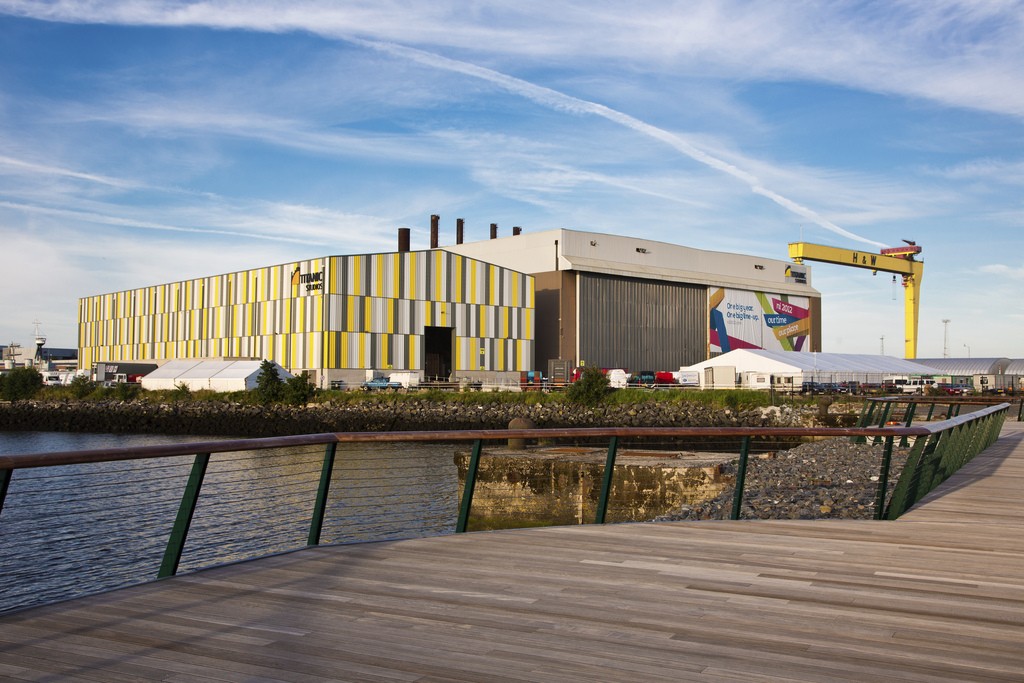 The popular TV series, “Game of Thrones” is filmed in the same studio that the Titanic was built (not the movie, but that actual RMS Titanic). ‘Titanic Studios’ is in Belfast, Northern Ireland and is the hub of all things GoT.

2. One for the money 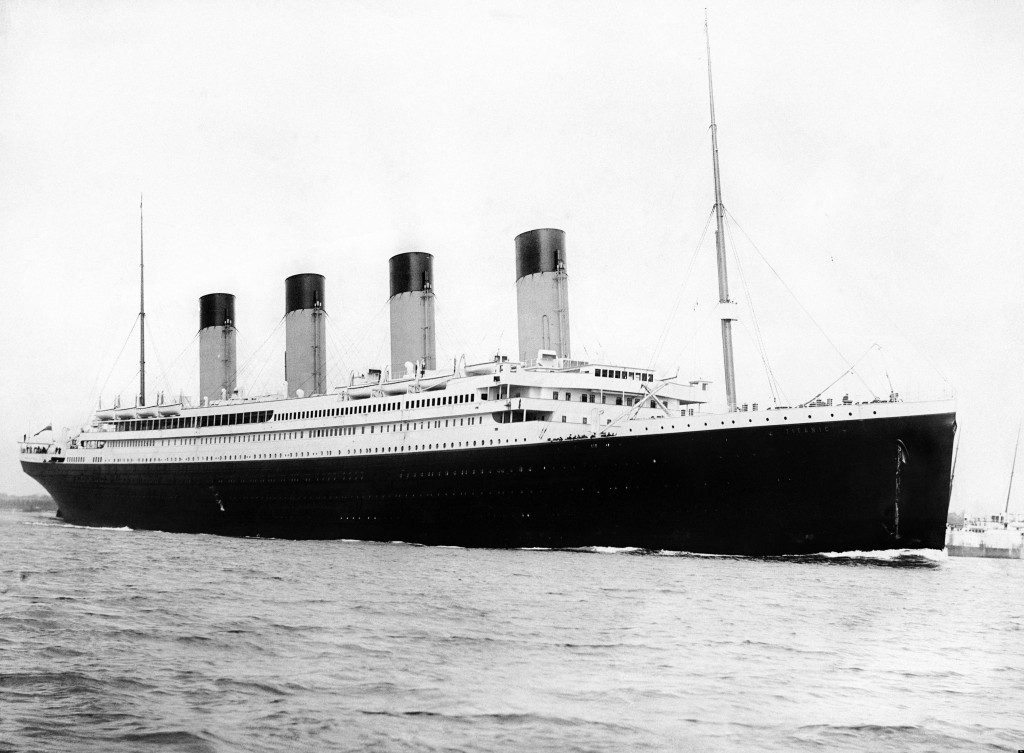 The side profile of the Titanic is one of the most well-known iconic ship images. But did you know that only three of the four cream and black funnels on the ship were functional? In fact, the last one had no purpose at all, but was included by engineers purely for aesthetic reasons.

4. One for the record

The maximum speed of the Titanic was 21 knots (24 mph). It was the fastest ship at the time. The fastest cruise ship today is Cunard’s Queen Mary 2 and has been recorded travelling up to 30 knots (34 mph). Apparently, speed is not valued in either cruise ship or iceberg industries. 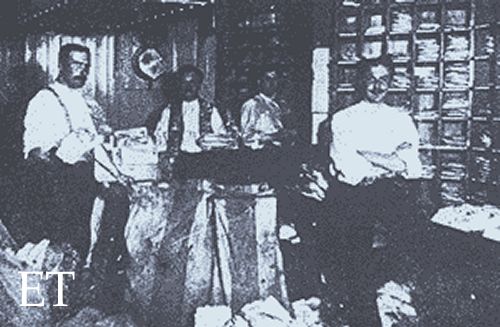 Did you know that the RMS Titanic was also a mail ship? That’s right, it had over 3,423 sacks of mail on board equaling over 7 million individual letters and packages. If any of these were recovered today, the USPS (since they were all being shipped for distribution to the U.S.) would attempt to deliver this mail to its final destination. Now that’s commitment.

We’re all familiar with the “Heart of the Ocean” that the old lady drops into the Atlantic at the end of James Cameron’s Titanic. Stories vary as to whether there was a real sapphire and diamond necklace that went down with the ship. But one first-class passenger had an even more valuable piece of jewelry that was to disappear—Eleanor Widener wore a famous multi-pearl necklace then insured for $100,000. Today that would equal about $2.38 million. Though she was able to stuff it in her pocketbook before boarding a lifeboat, it was recently stolen from a Copenhagen Titanic exhibit and has yet to be recovered. Cue “My Heart Will Go On.”

7. Hygiene on the high seas

8. How about this for coincidence? 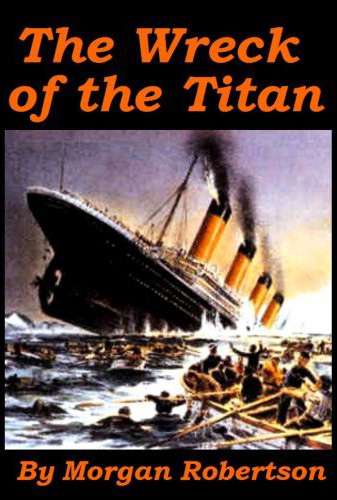 There was a book written 14 years before the Titanic sank (in 1898) called “Futility” by Morgan Robertson. In this foreboding novel, an ocean liner called the “Titan” (approximately 800 feet long) was nicknamed “unsinkable” before striking an iceberg in the North Atlantic Ocean on an April night and sinking. What’s even creepier? Robertson wrote that there were not enough lifeboats on board the “Titan” so most of the passengers drowned. See #8: shuddering. 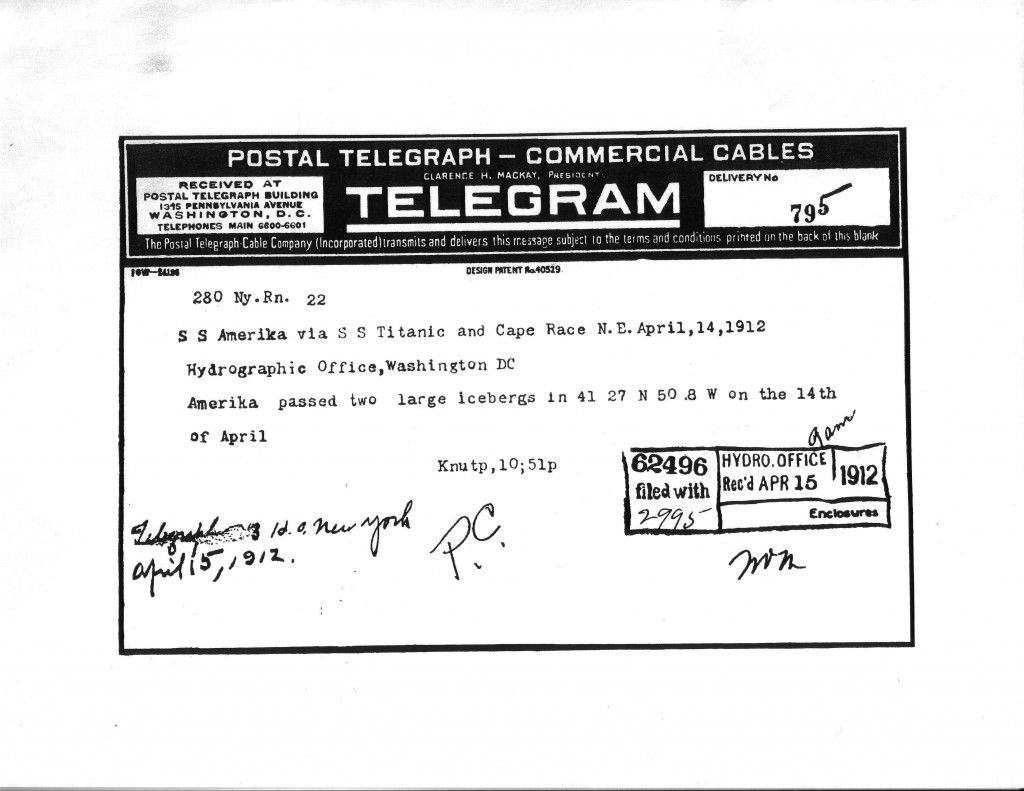 Captain Edward J. Smith was cautioned with iceberg warnings four times throughout April 14th—by the Caronia, Baltic, Californian, and Mesaba. It is said that it was the captain’s impressive experience and lack of seafaring casualties that caused him to ignore these warnings.

10. Less than a minute to react

After the lookouts spotted the iceberg directly in the Titanic’s path and sounded the alert, the officers on the bridge had only about 37 seconds before impact. They ordered the ship left and all engines in reverse during that time, but it was not enough to save the vessel. (Source)

11. A shortage of lifeboats

Everyone knows that the Titanic’s lifeboats weren’t filled to capacity. Want to know by just how much? Lifeboat 7 on the starboard side could have easily sustained 65 people, but only carried a mere 24. Lifeboat 1 had the least people—7 crew members and 5 passengers (12 people total) despite a capacity of 40. That’s less than 31 percent full!

Only one lifeboat ever went back to pick up more survivors. But even the officer that went back—fifth officer, Harold Lowe— was no gem. In fact, as the ship was sinking, he held a boy at gunpoint and forced him out of Lifeboat 14 because he thought the boy “too old” to be considered a child. Yikes.

13. The odds were not in their favor 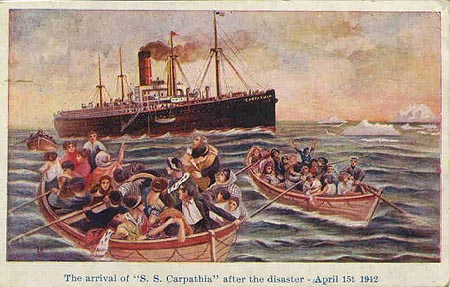 Photo courtesy of the Titanic Store

It took a mere 2 hours for the Titanic to vanish beneath the Atlantic. Its rescuer, the Carpathia, took 4 hours to reach them. This left 2 agonizing hours in 28 degree water (just below freezing) before help would arrive.

Though the Carpathia was the first rescue ship to reach the Titanic after it sank, there was actually a ship much closer. In fact, the first officers on the bridge of the Californian could see the Titanic on the horizon. They reported that the ship looked “very queer” from a distance and told their captain that they had seen solar flares rising into the sky. A series of unfortunate events led the Californian’s captain to issue no orders: the wireless operator had already gone to sleep so no distress signals were heard until morning and the erraticness of the solar flares caused the captain to believe that the Titanic was not in danger (it was commonly known by maritime captains and officers that a distress signal by solar flare was indicated through color, frequency, and duration of lapses between flares). Many believe that had the Californian responded, hundreds of more lives could have been saved.

15. Through hell and high water 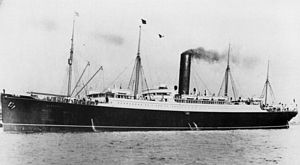 After hearing the Titanic’s distress call at 12:11 am on April 15, 1912, the Carpathia immediately set course at full speed (20 mph) to the Titanic’s last known whereabouts. It was about 58 miles away at the time, but Captain A.H. Rostron ordered that all of the ship’s heating and hot water be cut off to help make as much steam as possible available for the engines. Given the major ice in the area, it is a miracle that they did not hit an iceberg themselves. #heroes

Of the 705 surviving passengers rescued, only about 8% were men. 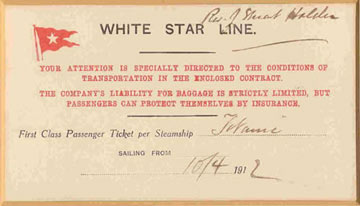 18. The most gentle gentleman that ever was

Millionaire Ben Guggenheim was a first-class passenger on the Titanic that refused a lifeboat. With his final words on earth, he entrusted a message to a surviving passenger for his wife: “No woman shall be left aboard this ship because Ben Guggenheim is a coward.” If you swoon, we’ll catch you. 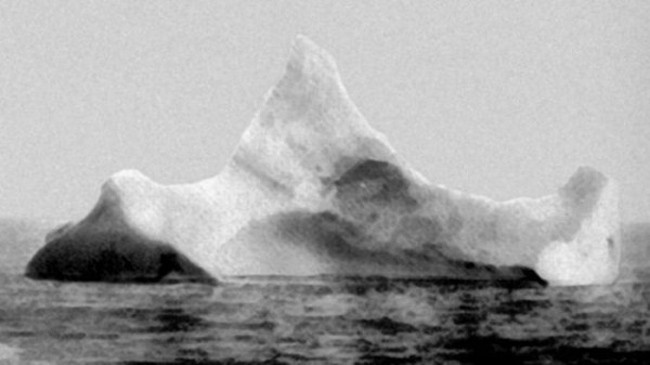 On April 15, 1912, a steward on another ship (the German SS Prinz Adalbert)  who hadn’t yet heard of the Titanic tragedy saw an iceberg with a red paint stain and took a photograph of it. 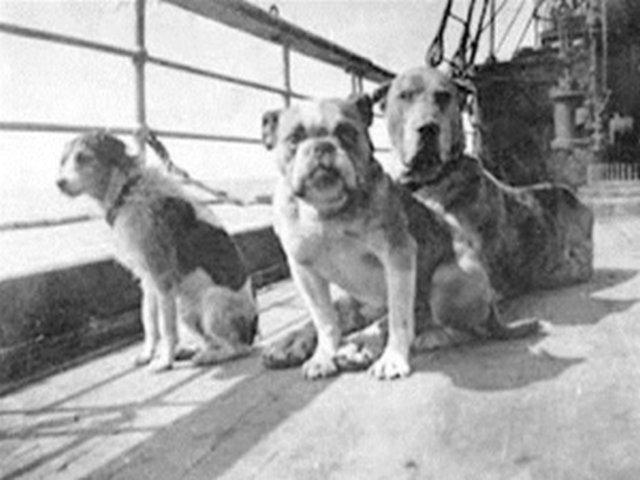 Among the surviving passengers, three were dogs smuggled onto lifeboats in the coats of their owners — two Pomeranians and a Pekingese. Only these three of twelve aboard survived. One woman refused to leave her Great Dane and went down with him.

21. Robbery on the high seas 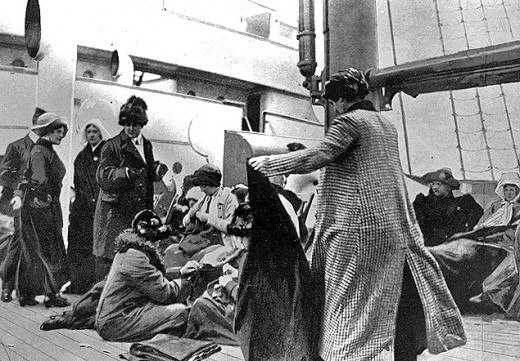 Photo courtesy of Images of History

After their rescue by the Carpathian, Titanic survivors were charged $1 per word (approximately $23.85 per word today) to send telegrams of their safety back home. One man spent his last dollar to send the word ‘safe’ to his mother. Like those people hadn’t gone through enough. 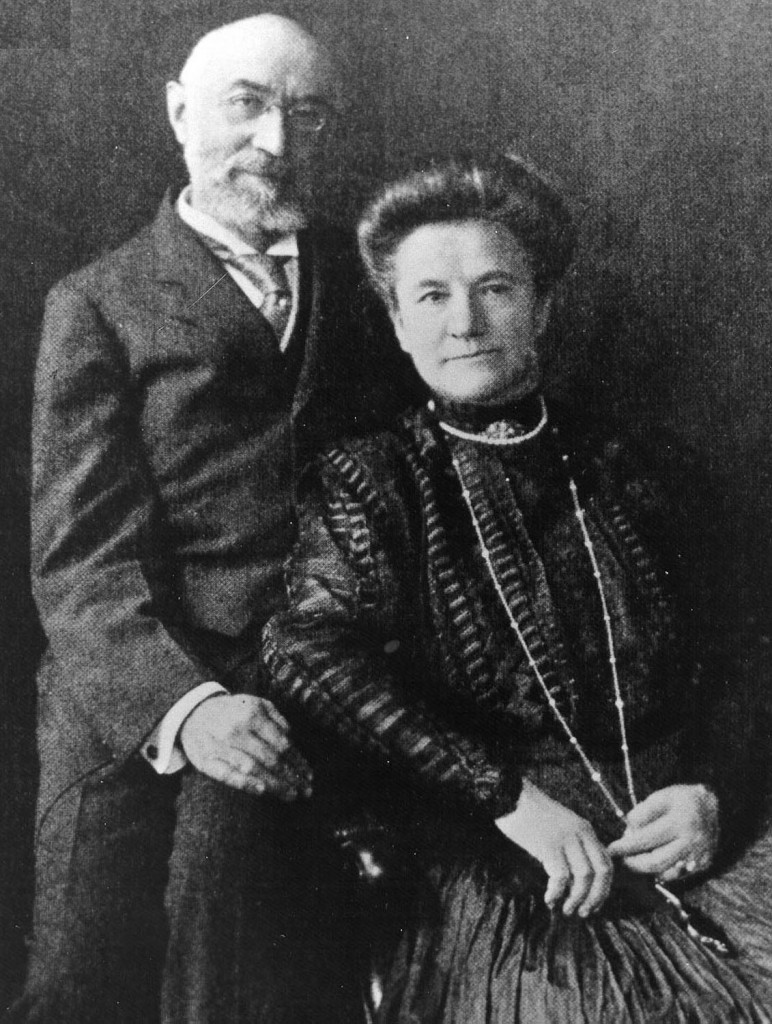 The original founders and owners of the Macy’s department store, Ida and Isidor Straus, died on the Titanic. The elderly couple were offered a place together on Lifeboat 8 as the ship went down, but Isidor refused to get on when there were so many women and children left on board (rah rah chivalry). When he tried to get Ida to board the lifeboat without him, the survivors on Lifeboat 8 all heard her reply: “Where you go, I go.” The two were last seen standing arm and arm on the deck of the ship as it sank into the sea. Tissues. Now.

The Mackay-Bennett was sent from Halifax, Nova Scotia shortly after news broke about the Titanic to recover bodies. Of the 1,517 lives that were lost, only 328 bodies were found — 119 of which were too badly damaged to take back to shore. I’m not sure what constituted “too badly damaged,” but that episode of the Walking Dead where the zombie gets stuck in the well tells us we don’t want to know.

24. How the wreck was found

When professor of oceanography Robert Ballard announced to the world that he was planning a mission to find the long lost ship Titanic, it was actually a cover story for a classified mission to search for lost nuclear weapons. The only reason that the Titanic wreck was actually found was because the team finished their mission early and spent the extra time they had before being due back to shore searching for the wreck. Talk about killing two birds with one stone. (Source) 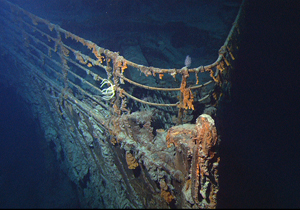 Due to 27 different strains of icky rust-eating bacteria, scientists estimate that the Titanic wreck will be reduced to a rust stain on the ocean floor by 2034. I am both fascinated and appalled.

For more fun facts about the Titanic, check out Titanic Letters the podcast!